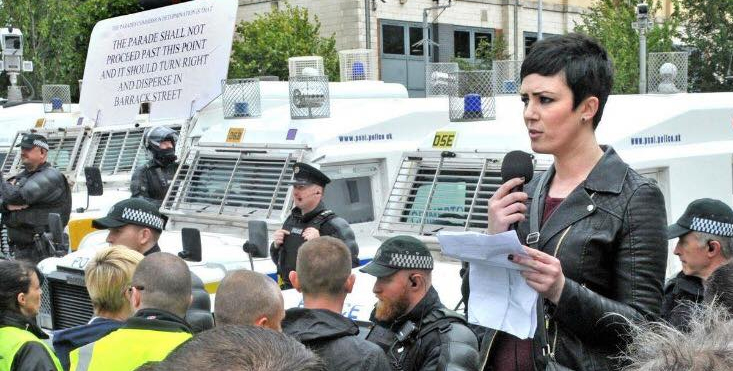 Hi Jo, and thank you for taking your time to talk to Ireland Information Group of Sweden. Can you please introduce yourself and how you are involved in the JFTC2 campaign?

Hi, thank you for the opportunity to talk about the campaign – we really appreciate it! So, I’m the chairperson of the Justice For The Craigavon Two Committee and have been involved with the campaign for almost two years now. My background has always been focused on human rights, both professionally and voluntarily, whether through working on anti-racism projects or with young people in local communities here in the North of Ireland so I was naturally drawn to the campaign after a friend of mine introduced me to the case and the facts. It’s hard to not want to do something – the facts are so shocking that anyone (or most!) that reads them is immediately appalled that this injustice has been allowed to happen in the first place and continue for as long as it has.

Brendan McConville and John-Paul Wooton where sentenced to life after PSNI Constable Steven Carrol was shot dead in Craigavon, Co Armagh, in March 2009, but there is many question marks in regards to the handling and evidence for this case, can you please tell us some case facts and the story behind this awful miscarriage of justice?

Of course, well as you have referred to yourself there are many inconsistencies, contradictions and concerns with the evidence put forward that convicted Brendan and John Paul. Some of the more shocking facts include:

1. The prosecution Witness, known as Witness M called the PSNI almost a year later, drunk and in the middle of the night to state he witnessed Brendan at the scene of the shooting on that night in March 2009.

2. Witness M continuously lied under oath, denying he had eyesight problems, the defence were subsequently able to find out that Witness M in fact had severe eyesight impairments that would have rendered his testimony medical impossible. There was no way he could have seen what he said he did at the distance he stated and in the weather conditions that evening (it was dark and raining)

3. His version of events were uncorroborated by those he said he was with that night, including his girlfriend and even his own father who described his son as a ‘Walter Mitty’, a compulsive liar.

4. Witness M also denied benefiting financially from the case – when in fact he was in receipt of monthly payments from the PSNI, including loans and holidays. He also received £50k from The Sun newspaper.

5. A tracking device attached to John Paul’s car by the British Army had data that would vindicate both Brendan and John Paul purposefully and intentionally deleted. No explanation has ever been provided.

6. There is no forensic evidence linking Brendan and JP to the weapon used to kill Steven Carroll – a partial finger print found on the weapon doesn’t belong to neither Brendan nor JP.

7. The legal teams also after PSNI attempts at sabotage had to lobby the United Nations for protection.
Remember also that this all took place in a Diplock court – no jury. Therefore both Brendan and JP were denied the right to a fair trial and sentenced to life sentences. Appeals have failed and at the moment we are relying on submissions to the Criminal Cases Review Commission (CCRC) to overturn this miscarriage of justice.

How the guys are treated in prison, considering being republicans in a prison ruled by the crown, accused for the murder of a PSNI Constable?

Both Brendan and John Paul are Republican prisoners and are housed in Roe house, a segregated wing for Republican political prisoners. I don’t think Brendan and JP would say that they are treated any differently than other Republican prisoners in Maghaberry (prison) All political prisoners are subject to stringent prison rules and the slightest breach will see them end up in the CSU – (Care and Supervision Unit). These offences that warrant isolation can vary from verbal disagreements or even just by playing traditional Irish music. The landing itself is subject to continuous lock downs and this can happen multiple times a day, where alarms are hit and prisoners are prevented from movement and are locked wherever they find themselves at that time. These lock downs can last for several hours with limited or no access to food, toilets or shelter etc. Another aspect of daily life for Republican prisoners and Brendan and JP includes forced strip searches – enforced by prison guards where they are held down against their will and violently and forcibly striped searched. Many prisoners have also reported sexual assault during these searches. In the case of the Craigavon Two we have seen just how far the prisoner service are willing to go to sabotage the case by planting details of a Governor in the cell of Brendan McConville, which was ruled by the prison ombudsman to be likely planted by prison staff. The lads face injustice in all aspects of their daily life – inside jail perpetuated by prison staff and outside by the media and state services.

What kind of support does Brendan, John-Paul and their family’s gets during their time in prison?

You seem to have a pretty big role in the campaign, has your involvement affected you and your family in any way?

Naturally considering the nature of the campaign it has attracted the attention of the state and that manifests in many various ways and in various forms of police harassment and attempts at intimidation but it wont deter us from fighting for justice. At the end of the day I have my freedom, I can come and go as I please, I can go out, live and enjoy life – Brendan and JP can’t do that, and that’s what keeps us all motivated – their freedom. Sending emails, making phone calls, attending meetings and protests and reading speeches is the least I can do whilst two men and their families are suffering at the hands of a corrupt British state.

We know what we’re doing is right and we will continue to fight “until justice is done and seen to be done”, as Gerry Conlon (Guildford 4 and previous chair of the committee – RIP) once stated – no level of state harassment will ever change that.
As you know, Ireland Information Group of Sweden joined the JFTC2 campaign recently. For us it is very important to highlight and spread information about miscarriage of justice and internment in general. Is there any other groups, organizations or parties who highlight this in Europe or other parts of the world as you are aware of?

We have a lot of support from many groups across the world, JENGbA, (Joint Enterprise Not Guilty By Association) and MOJO (Miscarriage Of Justice Organisation) are two of the most relevant to the lads case and have continued to be pillars of support as we push through one of the last avenues for legal redress, the Criminal Cases Review Commission. JENGbA is a grass roots group established to fight for justice for all those sentenced under the unjust and incorrectly applied Joint Enterprise doctrine and they would have over 600 cases that they support, the Craigavon Two are one of those cases. MOJO – Miscarriage of Justice Organisation are a human rights based charity dedicated to changing the criminal justice system and reducing the number of miscarriages of justice.

Also here at home in the North and South we have fantastic support from the Anti-Internment committees, including those in Dublin, Belfast and Munster. The IRPWA have also been an excellent source of support as well as a group of dedicated activists and individuals who have donated their time and/or skills to help the campaign and without this support we wouldn’t be where we are now. Solidarity at home and internationally is crucial for the campaign to be successful.

Again, thank you for taking time to answer our questions. Is there any last word you want to say to our readers?

I would like to thank you for giving me the time to talk about the campaign and to thank your readers for their continued support and to encourage anyone that wants more details on the case and our campaign to free Brendan and John Paul to visit our Facebook page or website – www.jftc2.com.

Message of solidarity to the Republican Sinn Fein Ard Fheis 2022

Friends, Comrades, The Ireland Information Group of Sweden sends its best wishes to your Ard fheis. We salute the members activists in Republican Sinn Fein for their steadfast and courageous work, both in the Freestate Läs mer…