We often receive letters from comrades in Ireland, this week we received a letter from fellow comrades in the Portlaoise prison.
We choose to publish this letter, to increase the understanding of those imprisoned rebuplicans. 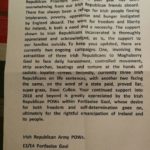 As ever, the continued and unrelenting support for Irish Republican Prisoners over the past year has been overwhelming from our Irish Republican friends aboard. There has always been a refuge for Irish people fleeing intolerance, poverty, oppression and hunger instigated by England aboard- The want for freedom and liberty for Ireland, in both a need a necessity. The support shown to Irish Republicans incarcerated is thoroughly appreciated and acknowledged, as is, the support to our families outside. To keep yous updated, there are currently two ongoing campaigns. One., involving the extradition of three Irish Republicans to Maghaberry Gaol to face daily harassment, controlled movement, strip searches beatings and torture at the hands of sadistic loyalist screws. Secondly, currently three Irish Republicans on life sentences, with another two facing the same, on the word of a state paid, proved liar, super grass, Dave Cullen. Your continued support into 2018 and beyond is greatly appreciated by the Irish Republican POWs within Portlaoise Gaol, whose desire for both freedom and self-determination goes on, ultimately for the rightful emancipation of Ireland and its people.

Message of solidarity to the Republican Sinn Fein Ard Fheis 2022

Friends, Comrades, The Ireland Information Group of Sweden sends its best wishes to your Ard fheis. We salute the members activists in Republican Sinn Fein for their steadfast and courageous work, both in the Freestate Läs mer…